The market for new homes in the U.S. continued to surge in September 2020, with the trailing twelve-month market cap reaching levels not seen since the days of the first housing bubble. 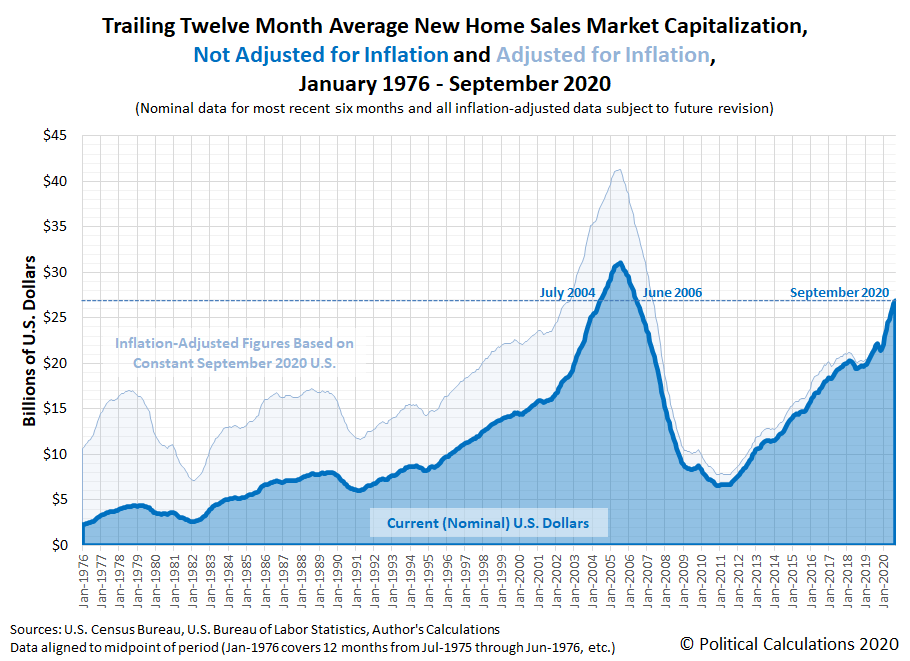 The story is similar after adjusting for inflation, although here the first bubble period with higher national new home market caps stretches between December 2002 and April 2007.

Much of today’s demand is being fueled by American families seeking to escape corrupt cities that permitted sustained breakdowns in public order during the summer of 2020, sparking sharply increased demand in the U.S. market for new homes. That

Nearly nine months after the White House declared COVID-19 a public health emergency, nursing homes in the U.S. are still facing shortages of critical protective equipment such as masks and gowns. A new analysis of government data, looking at the trajectory over the summer, finds that shortages have gotten worse over time.

By late August, the report says, 226,495 nursing home residents were at risk because they lived in facilities with dangerously low supplies—less than one week’s stockpile—of one or more types of PPE. The report, from the Frontier Group and the U.S. Public Interest Research Group Education Fund, pulled three months of data that nursing homes began submitting to the Centers for Medicare and Medicaid Services in May.

Between May and August, nearly half of the country’s 15,000 nursing homes—which house around 1.3 million people—reported having low supplies at some point. Twenty percent of the homes reported completely running

The teens unveiled their second tiny home Monday they have built for a homeless vet.

“I’ve been working on this house for two years,” C.J. Schoettlin, a student at Kingwood Park High School, said.

In only 209-square-feet, students were able to fit all the essentials: a bed, dining table and chairs and cabinets.

“We hope to make these for years to come,” said KPHS senior Parker Ryan.

The tiny house is the second built by the architecture and engineering students at KPHS.

The home was built for a veteran in need of a place to live.

“Being able to pick up a veteran off the street and give him a home to live in and grow is just amazing to me,” Ryan said. 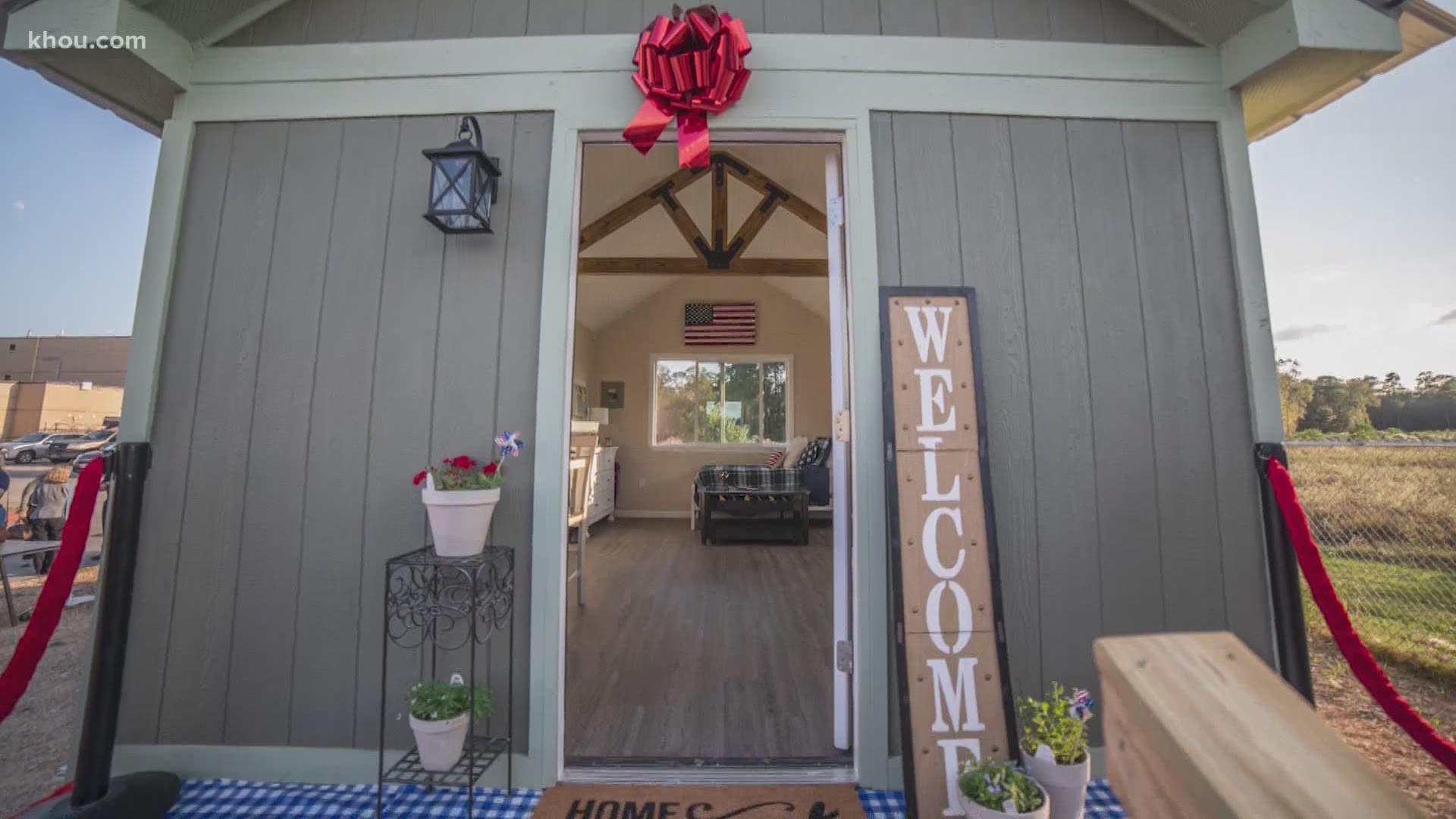 To make ends meet, Martha Tapia works 64 hours a week at two Orange County, Calif., nursing homes. She is one of thousands of certified nursing assistants who perform the intimate and physical work of bathing, dressing and feeding the nation’s fragile elderly.

“We do everything for them. Everything you do for yourself, you have to do for the residents,” Tapia says.

And she’s one of many in that low-paid field, predominantly women of color, who work at more than one facility.

In March, when the coronavirus began racing through nursing homes, the federal government banned visitors. (That guidance has since been updated.) But even with the ban, infections kept spreading. A team of researchers from UCLA and Yale University decided to examine the people who continued to enter nursing homes in that time — the employees.

Keith Chen, a behavioral economist and UCLA professor, says the key question is

The Silverado Fire and Blue Ride Fire in Southern California burns over 8,000 acres and forces thousands to evacuate their homes.

More than 500 firefighters turned out in force to battle the Silverado Fire that quickly blackened more than 7,200 acres near Irvine. As a precaution, 70,000 people were ordered to evacuate from their homes, Fire Capt. Greg Barta said.

Two members of a fire hand crew were badly burned, the Orange County Fire Authority said. The two, ages 26 and 32, suffered second- and third-degree burns on at least half of their bodies.

“They are gravely injured. Their families are with them,” said OCFA Fire Chief Brian Fennessy. “We are giving them all the support we

CONNECTICUT, USA — The state health department just issued a mandate that all nursing homes and assisted living facilities to test their staff for the Coronavirus once a week. State health leaders are concerned about the rise in the community spread of COVID.

For the reporting period of October 14-20, 71 residents and 86 staff have caught COVID at CT’s 213 nursing homes. 15 more nursing home residents have died. Matt Barrett, President of the Connecticut Association of Healthcare Facilities said, “There have been 3 or 4 outbreaks that are concerning, and I think they are evidence of community spread on the rise.”

Recent outbreaks include the Avon Health Center, Touchpoints at Chestnut in East Windsor, Fairview in Groton, and Autumn Lake in New Britain. In a memo to all

Struggling to get on the property ladder in New Zealand? Perhaps a move to Italy is in order.

Dilapidated homes in the Sicilian town of Salemi are being auctioned off at a starting price of just €1 (NZ$1.77), CNN reports.

The only catch is you have to have to provide the local council details of how you plan to renovate it, and pay a €3000 deposit – refunded once the work is complete.

The homes were originally constructed in the 1600s, hundreds of years before many Kiwi homes with heritage protection were built, but were damaged in a quake in 1968.

Thousands fled Salemi following the quake, and it’s taken years for the city to

1 to 2 feet of snow helped contain Colorado’s largest-ever wildfires, but it may not be enough

More than 500 firefighters turned out in force to battle the flames that quickly blackened more than 7,200 acres after breaking out in the Silverado Canyon area. As a precaution, residents in 70,000 homes were ordered evacuated, Fire Capt. Greg Barta said.

Two members of a fire hand crew were badly burned fighting the fires, the OCFA said. The two, ages 26 and 32, suffered second- and third-degree burns on at least half of their bodies.

Start the day smarter. Get all the news you need in your inbox each morning.

“They are gravely injured. Their families

Close to 100,000 homes and 6,000 businesses are without Comcast services due to Pacific Gas & Electric Co.’s power shut-offs, the company told The Chronicle Monday.

Comcast didn’t immediately clarify cities and towns in the Bay Area that are impacted but said, “the locations would align with where PG&E power shutoffs are taking place.” Affected services affected include internet, landline and mobile phone services.

PG&E shut off power to 361,000 customers in 36 counties, including eight of nine Bay Area counties, beginning Sunday morning to brace for the strongest winds of the year. The utility sometimes shuts down power lines as a wildfire-prevention measure during highly dangerous wind conditions.

The shut-offs are expected to continue into Monday evening, PG&E said. Once fast, gusty winds subside, the utility will inspect its power lines

CHARLOTTE — Sales of new homes fell by 3.5 percent in September to a seasonally-adjusted annual rate of 959,000 million units, the government said Monday, as the housing market’s summer buying season came to a close.

The U.S. Commerce Department said Monday that despite the modest decrease, sales of new homes are up 32.1 percent from a year earlier, as the housing market remains strong despite the pandemic.

The housing market, like most of the economy, came to a near standstill in March and in April, causing the typical spring summer buying season to be delayed until the summer. Once economies reopened, pent-up demand translated into sales of both new and existing homes, driving home prices in many places to record highs.

New home sales for August were revised downward to 994,000 from a previously reported 1.01 million units.

The median price of a