A James Bond-worthy Malibu retreat is now on the market, courtesy of former 007 himself. Pierce Brosnan is listing his palatial beach home for sale, with a staggering $100 million price tag attached.

The actor and his wife, journalist and filmmaker Keely Shaye Brosnan, started working on the custom 12,500-square-foot home in 2002, shortly after the debut of Brosnan’s fourth Bond film, Die Another Day. It took a decade to complete the sprawling residence, which is designed in a Southeast Asian-style that’s inspired by the Irish actor’s time in Thailand shooting Tomorrow Never Dies.

The Malibu getaway, which the Brosnans named Orchid House, sits on 1.18 acres of land right on Broad Beach, with 117 feet of direct oceanfront, per the listing held by Compass broker Chris Cortazzo. 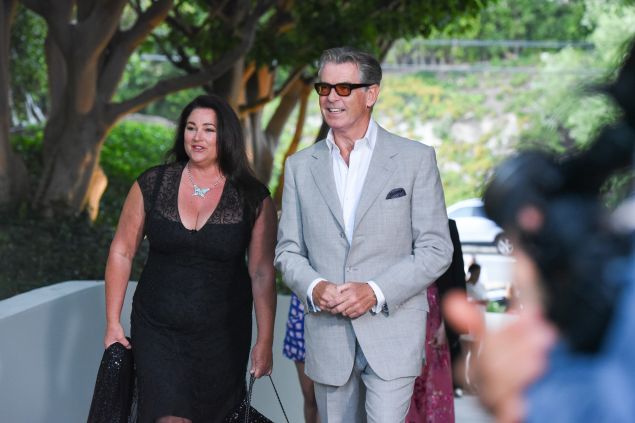 There are walls of glass, foldaway doors, handcrafted woodwork, wide-plank teak floors and scissor-truss ceilings throughout the home, as well as wraparound lanais and courtyards.

The kitchen is fitted with custom teak cabinetry, two islands, quartz crystal countertops and a dining area with a fireplace. The great room is composed of living and dining areas, with ocean views, a fireplace and floor-to-ceiling glass doors.

The owner’s suite, located on the upper level of the home, is outfitted with teak cabinetry, a sitting area and two fireplaces, as well as a wall of glass that opens up to a private deck. There are double bathrooms, both with chandeliers, ocean views and window walls that open to dressing rooms with custom closets and cabinetry.

The lower level of the home is divided into two wings, with a soundproof projection movie theater with tiered seating, a bar and custom surround sound on one side. The other wing is comprised of a mirrored gym, recording studio and a spa with a dry and infrared sauna, steam room, Japanese soaking tub, cold plunge pool and a shower.

Outside, there’s a saltwater pool and a partially-covered deck with seating and dining areas, in addition to a big gas fire pit and two glass-enclosed areas for lounging and dining.

The Brosnans raised both of their sons in this home, which they used as their main residence, per the Wall Street Journal. Now, however, the couple has mostly relocated to Hawaii, so they don’t need to maintain quite as large of a home in California.

They did purchase a $2.95 million home in Santa Monica last year, which it turns out was for the use of their children. The actor told the WSJ that there’s definitely room for him and his wife in the aforementioned Santa Monica abode, and that he’s also considering scooping up another home on the West Coast, perhaps in Santa Barbara.

When is the best time of year to buy a house?