Can we finally be at a point where there is an agreement with a potential stimulus package? On Friday, both the House and financial advisors for Trump have agreed to meet and talk again with a potential multi-trillion dollar package. The markets embraced this and have pushed the indexes up considerably with their largest gains since May. The question then becomes: Is there substance with these moves and can investors begin to bet on this with conviction?

First, and foremost, I am an economist. I approach my investments with a broad eye on all the various spokes in the wheel. I wanted to take an overview look at the recent market movements and pull in a few other indicators. A lot of investors look for – and, at – only one stock without taking in the broader markets to judge their timing on an investment. 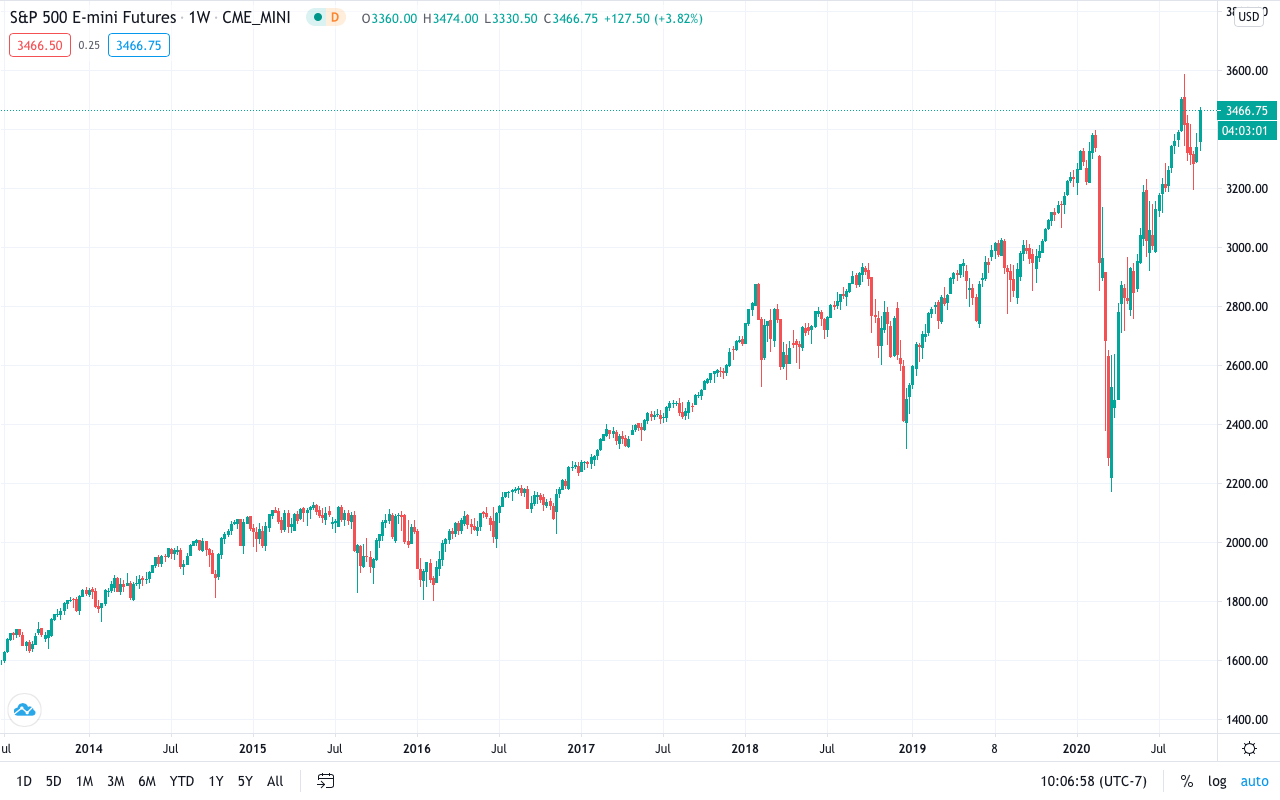 While the indexes have pushed upwards over the past couple of weeks, I believe we are going to move a bit sideways here and there. Economics is a process, not an event. There is one big major event coming up that may make investors wary of just pushing for all-time highs in one go: The upcoming presidential election. No one seems to believe what the polls are saying anymore. Biden has a lead. But anyone who disbelieves that he’s a lock to win simply responds with: But, Hillary!

So, this turmoil that has plagued the markets the past few weeks after hitting recent highs may very well creep back into the market again sometime soon. Me? I’m simply waiting for the November 3rd date before I act. It may be that a few others out there are doing the same. Or, not. After all, the market did just have its best week since August. 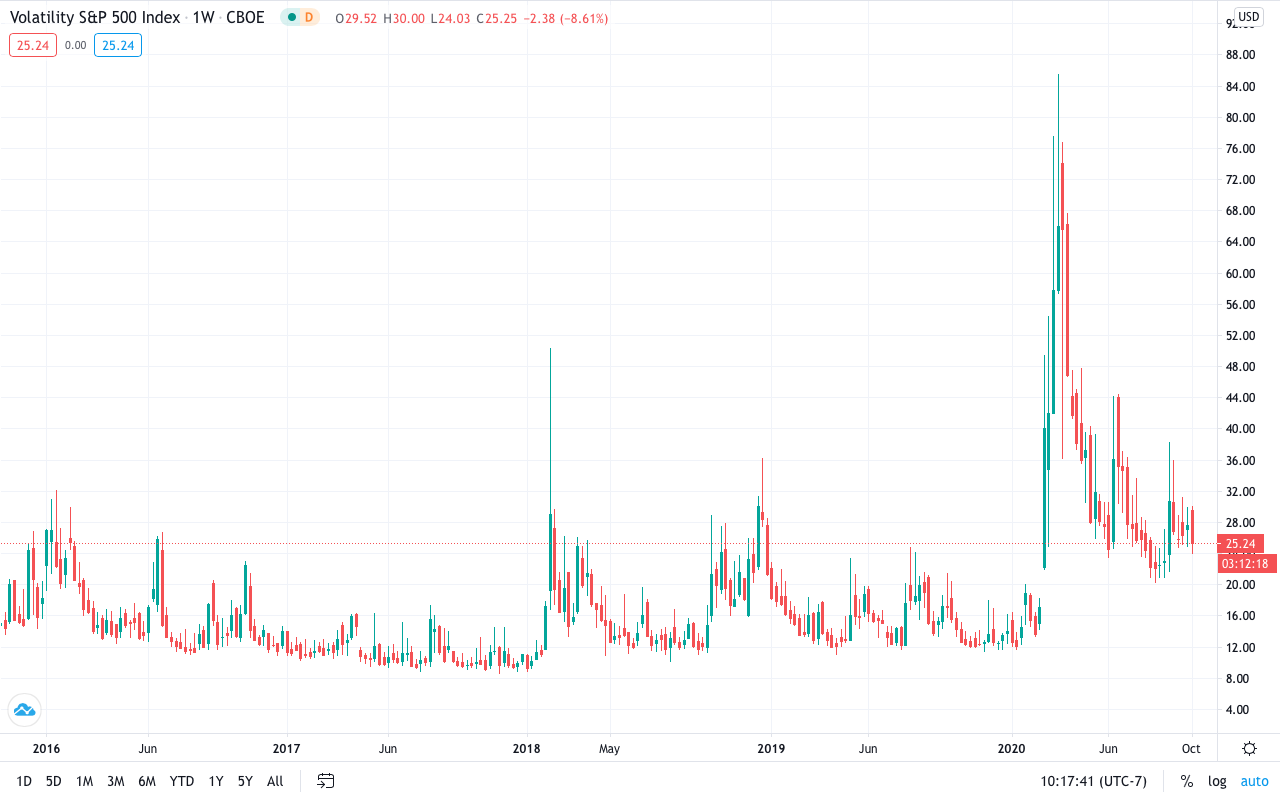 The market is a long way away from its normal levels. The volatility in the markets peaked with the COVID-19-induced selling in March as the world’s economies all began to shut down in response to the pandemic. That brought in the initial surge of volatility. But the most recent move higher, starting at the market’s peak on September 2nd, has elevated the VIX. This is a barometer that I keep close tabs on to see what is going on in the markets. Eventually, the market will settle down to its more normal levels, but I’m still waiting on the election as I think it could be an interesting event.

Now, a look at two key barometers for interest rates: the US 10-Year Note and the Federal Reserve Benchmark rate, respectively: 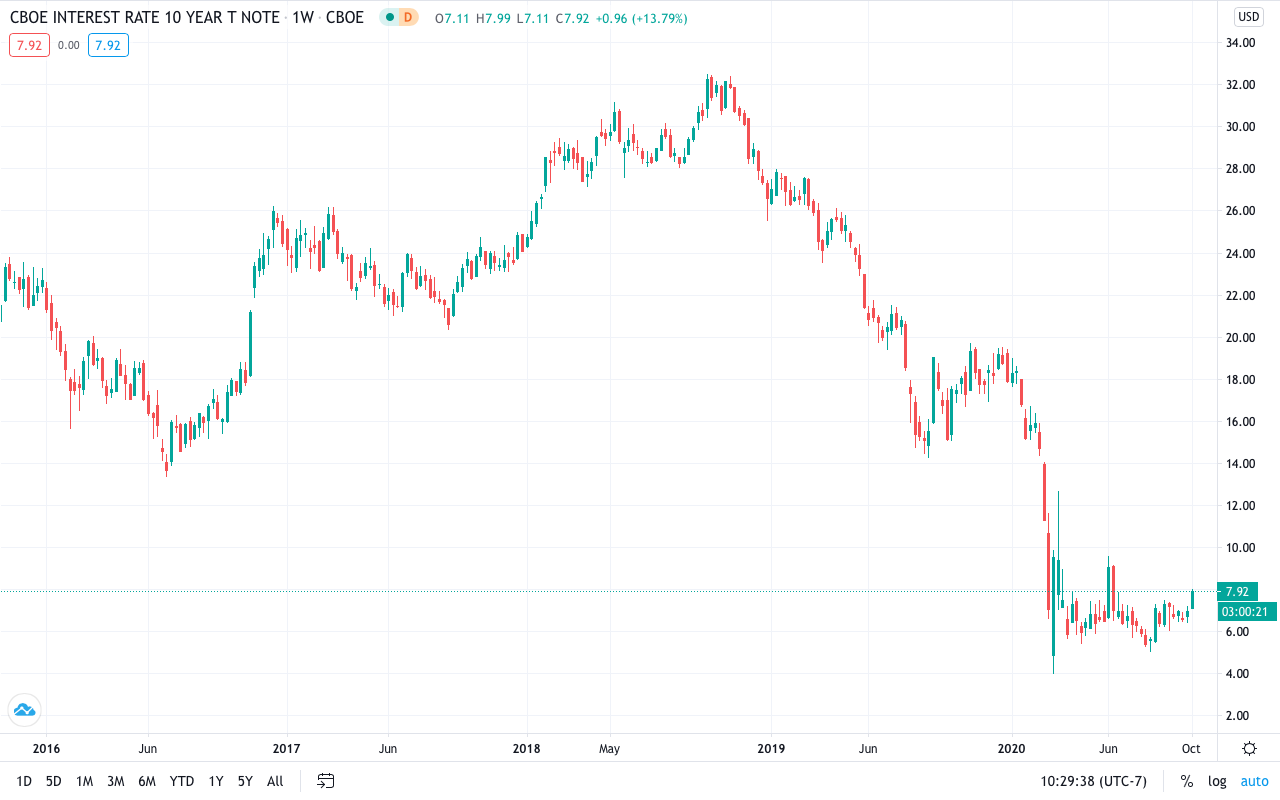 Interest rate yields are up slightly for the week. That is in direct correlation to the stock market moves as investors that sought haven in interest rates have begun their move back into equities. That selling of the bonds, freeing up capital, pushed up rates a bit moving to 0.789%, a paltry sum for the government to borrow.

Given that, however, I’ve been a little keen on the government’s programs to stimulate the economy. Inflation is above this level at 1.3%. So, therefore, the money that is being borrowed is effectively free… just as long as it gets paid back.

I’m a big believer in the fact that a government can’t just print money, ad infinitum, without any kind of consequence. It’s actually a physics theory that I apply and, perhaps, you’ve heard of: For every action, there is an equal and opposite reaction.

I believe that the Federal Reserve’s moves – along with the Federal Government in general – will have an adverse effect on the money supply. They’ve been effectively printing money for quite some time since the 2008 financial crisis, and although they backed off the gas pedal, I think this country should be on the lookout for inflation. Here’s a look at the M2 money supply, which includes M1 and bank deposits:

Notice the spike in the past year? This is the Federal Reserve’s program to mop up any supply of cash that the Federal Government just invented in April with its first $3T stimulus package. Now, they are talking about even more stimulus, potentially at $1.8T, and that is what has gotten the market moving higher, the new stimulus talks.

What will happen is the Federal Reserve will take on a portion of the new stimulus package and merely create new money from it after the Federal government passes a new stimulus package. It may be that we are seeing the effects of this already as investors move into other commodities that are viewed as hedges against inflation.

Gold in a new bull market

Gold has been moving higher and higher since the middle of 2019: 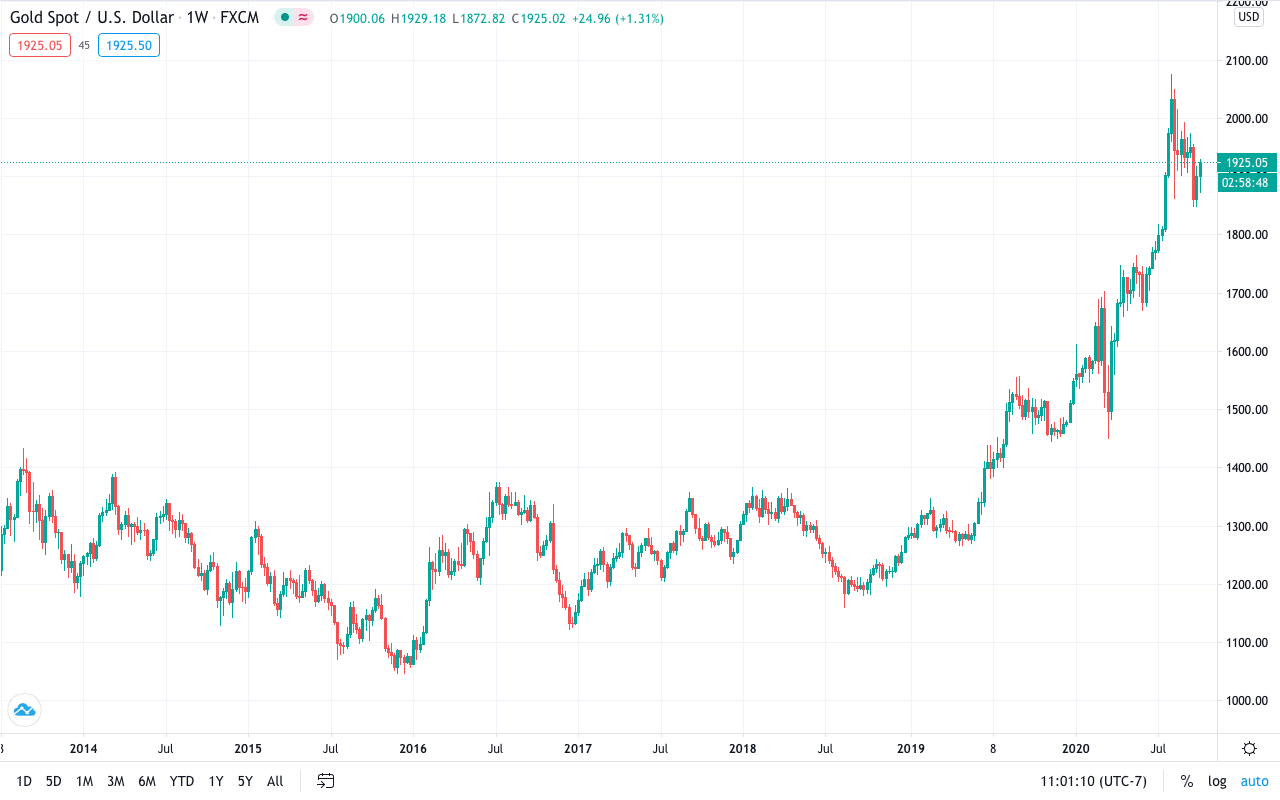 The moves in gold began in 2019, breaking out of a range that the market had been stuck in for some time. I have a tough time correlating gold and the current stimulus together because of these dates. But I also have a tough time dismissing future moves altogether moving forward. If you look at the market moves in March when the rest of the world equity markets were selling off, gold followed suit. Then, like all of the other markets, gold surged along with these latest price movements.

Moving forward, over the next few years, with all of the money creation that is happening, gold will act as a hedge against future inflation and will move higher. Investors are likely to move along with them and buy up gold, continuously pushing the price higher and higher. Over a few years’ time, I could see gold moving higher in response to the increase in the money supply and inflation gains.

Like many individuals, I am bullish on the market. However, I am hesitant to get involved in the current move simply because politicians are going to play politics. I feel fairly certain that a new stimulus package will be coming at some point. However, I do not necessarily believe that a package would come before the next election. This may bring in some uncertainty into the markets and selling in the equity markets may ensue. This will push down equity markets, and the flight to safety will push up the 10-Year Note, bringing down interest rates.

Eventually, however, I think the last stimulus package, and any new package, will have an adverse effect on the money supply with the eventuality that there is more inflation. This may push the hand of Federal Reserve to raise interest rates. This may take a few years, possibly 2-5, before the Federal Reserve moves on this, if need be.

In the meantime, while the market is positioning itself ahead of the election, I am going to wait before I put on any new positions; the potential of volatility is quite high going into the last couple of weeks before the election.

Disclosure: I/we have no positions in any stocks mentioned, and no plans to initiate any positions within the next 72 hours. I wrote this article myself, and it expresses my own opinions. I am not receiving compensation for it (other than from Seeking Alpha). I have no business relationship with any company whose stock is mentioned in this article.