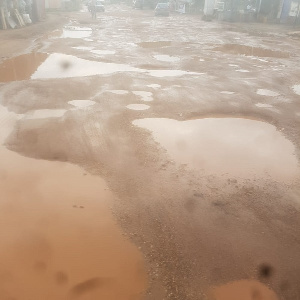 File Photo: The over 27-kilometer road spans from Kwadaso to Nweneso

Residents and road users within Atwima Techiman and surrounding communities have threatened to sue the contractor working on the Kwadaso-Atwima-Twedie road in the Ashanti Region.

They say the contractor has abandoned the project as the road further deteriorates, rendering road users helpless.

Asabea Contractor has been working on the said stretch but has abandoned the project for several months as residents have been at the mercy of pot holes and death traps that have riddled the road.

The over 27-kilometer road, which spans from Kwadaso through Twedie, Foase to Nweneso, when completed, will enhance the living standards of residents and commuters on that stretch.

But until then, the situation has worsened as perennial rains wash away parts of the road, creating deep gullies and erosion.

The residents poured out their frustration when GhanAkoma production followed up on ongoing road projects in the Region.

“We are very worried about the state of our road and we don’t understand why the contractor has abandoned the project for more than 2 months now.”

The residents, who appeared furious and disappointed, further lamented that “we are planning to take the contractor to court for abandoning this road as the road deteriorates into a death trap”.

The angry residents cited examples of numerous cars, which have crashed into abandoned bridges which have developed manholes in the middle of the roads.

“I don’t know why the contractor has decided to leave the project as residents wallow in dust pothole-riddled-road.”

Mr. Okyere Tawiah complained that “I am sure the contractor has decided to sabotage the government that’s why he has abandoned the project”.

He added that the situation has given him sleepless nights as all efforts to reach the contractor have been unsuccessful.