Police in the Muslim-majority archipelago of Indonesia were searching for suspected terrorists Saturday after the throats of three Christians were slit, another was beheaded and a Salvation Army post and Christians’ homes were burned down on the island of Sulawesi, according to reports.

About 10 people from a “terrorist” group carried out the killing on Friday morning in a hilly, remote village near the region of Sigi in Central Sulawesi province, Reuters reported, based on what national police spokesman Awi Setiyono said in a television interview. 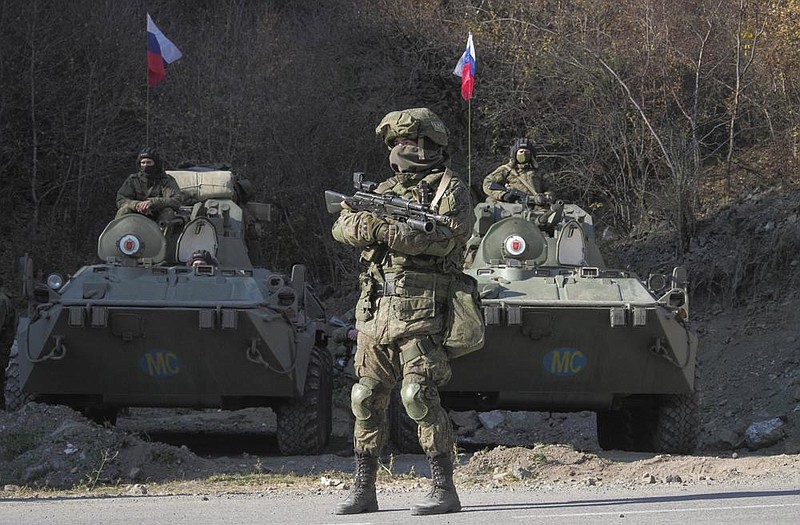 Russian peacekeepers patrol Saturday in an area near the Dadivank, an Armenian Apostolic Church monastery in the separatist region of Nagorno-Karabakh. More photos at arkansasonline.com/1115nagorno/.
(AP/Dmitry Lovetsky)

KALBAJAR, Azerbaijan — In a bitter farewell to his home of 21 years, Garo Dadevusyan wrenched off its metal roof and prepared to set the stone house on fire. Thick smoke poured from houses his neighbors had already torched before fleeing this ethnic Armenian village.

The village is to be turned over to Azerbaijan today as part of territorial concessions in an agreement to end six weeks of intense fighting with Armenian forces. The move gripped its 600 people with fear and anger so deep that they destroyed their homes.

The settlement — called Karvachar in Armenian — is legally part of Azerbaijan, but it has been under the control of ethnic Armenians since the 1994 end of a war over the Nagorno-Karabakh