Based in Wayne, New Jersey, Valley National Bancorp (VLY) is a $40.7 billion asset holding company and parent to Valley National Bank. All told, the bank has 235 branches and has a rather bifurcated footprint. While most branches are located in the New York and New Jersey area, past acquisitions helped the bank build a presence in the southern half of Florida and Alabama (mainly Montgomery and Birmingham).

At the end of the third quarter, the $32.4 billion loan portfolio had a pretty sizable real estate tilt. While not necessarily a bad thing today, I believe it is noteworthy to point out that over 57% of the portfolio is associated with commercial real estate (CRE) or construction. While most banks are closer to 40%, VLY is not pressing on the extremes like some more specialized lending banks.

While I am fairly bullish on regional and community banks as a whole, I find myself to be relatively neutral on VLY when compared to peer regional banks. VLY does have a larger commercial real estate portfolio, which typically performs the best in the beginning stages of an economic expansion. However, I think this recovery is different and the geographic New York City footprint gives me pause.

Also, the valuation of 1.32x is near the peer average of 1.3x on price to tangible book value per share. While credit has proven itself to have performed well throughout the last recession, I don’t think investors are going to look past the heavy dependency of New York commercial real estate. While the dividend yield does look fairly strong and very sustainable, I believe yield focused investors can find better banks with more share price upside potential too.

While most banks have started to experience some spread revenue reductions, VLY actually increased its net interest income. While the fractional growth from the second quarter was just $579 thousand, the third quarter results of $284.1 million proved growth is possible in the middle of a recession.

This spread revenue improvement was driven by a lower cost of funds which in turn produced stronger net interest income. The main driver was that the overall cost of funds decreased 13 basis points from the second quarter. While this sizable reduction is unlikely to be replicated, it does prove that funding costs can continue to work lower.

Total loans increased $101 million, better than I expected, largely driven by growth in commercial real estate and some legacy PPP loans being funded. The most surprising aspect, overall loan growth would have been stronger but VLY decided to sell more mortgages than usual (rather than add them to the balance sheet). In my mind, this was the more prudent option since mortgage loans have a fixed rate and would cause a drag on revenue growth when interest rates do eventually turn higher. 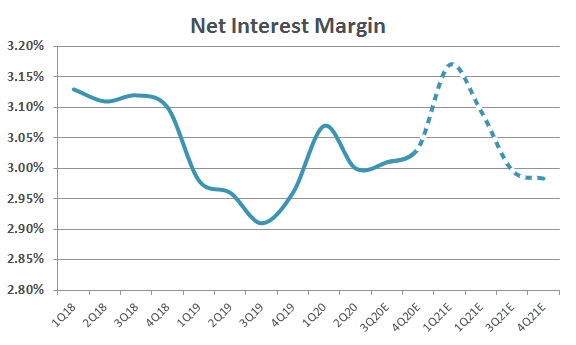 While I am not expecting the longer-term net interest margin (NIM) to be materially higher than it is today, investors should note that when PPP loans are forgiven (in late 4Q and early 1Q21), future unearned revenue is pulled forward. This “pulling forward” is actually an accounting rule to true-up all outstanding future revenue and expenses associated with these government backed loans. Since the 2-year life is recognized in one quarter, the NIM should pop as a result. I am modeling that NIM should increase materially, however, it will likely drift back lower once this PPP related noise works itself off the balance sheet.

As one can see from the chart below, VLY performed materially better than peer banks in the last recession with regard to credit. While the current trend looks to be a bit of a replication of the last recession, I am a little more skeptical of the future credit performance. My overall concern is driven from the large commercial real estate loan portfolio in a tough economic environment. 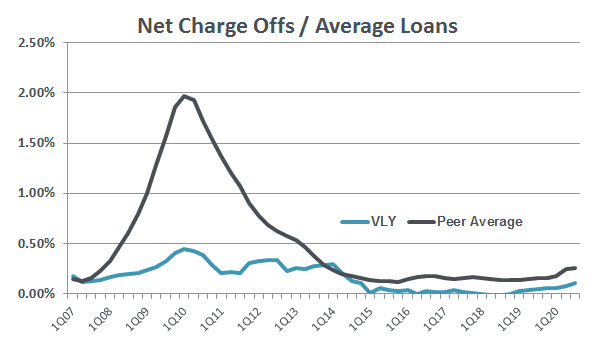 In the third quarter, VLY added $31 million to the loan loss reserve through its provision expense. While most banks took a wait and see approach, VLY continued to add to its reserve because of its larger real estate portfolio and a slight deterioration in the macroeconomic outlook.

Remember, VLY has a large percentage of loans in commercial real estate in New York City and a sizable taxi medallion lending operation. In my mind, the previously inflated CRE valuations were likely underwritten with those unsustainable prices. While VLY won’t necessarily take a credit hit should the underlying collateral of a building be revalued lower, it will be forced to increase the provision should future building valuations continue to compress. 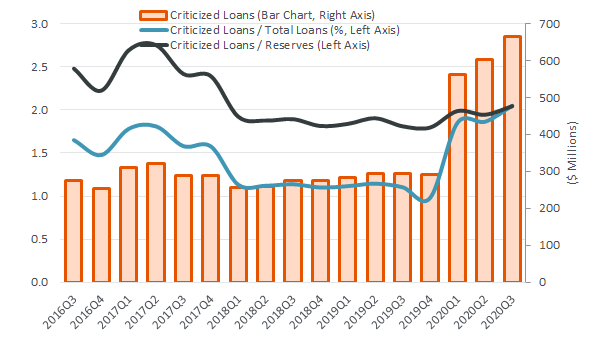 The picture above sums up my concerns in one simple to read chart. As the overall credit profile continues to slip and criticized loans continue to work higher, the quarterly provision expense is likely to drift higher in lockstep. In the third quarter, while most banks took a “wait and see” approach to their reserve levels, VLY continues to increase its reserve because its underlying collateral values continue to drift lower.

As one can see from the first chart, the current valuation of VLY could look rather enticing since it is near multi-decade lows. In my mind, while the current valuation is somewhat appropriate (with respect to its past levels), there is just too much concern on the lending portfolio to recommend the shares today.

Since the current valuation is near peer-like levels, I find additional upside relative to the bank index to be rather limited. Simply put, in my mind VLY has more credit and portfolio risk. Since banks tend to trade in tandem with one another, I think VLY will likely trade in line with peers (at best) for the foreseeable future.

Disclosure: I/we have no positions in any stocks mentioned, and no plans to initiate any positions within the next 72 hours. I wrote this article myself, and it expresses my own opinions. I am not receiving compensation for it (other than from Seeking Alpha). I have no business relationship with any company whose stock is mentioned in this article.

Spain to vaccinate workers and residents at nursing homes first